The Role of Emotional Intelligence in the Workplace

Home / News / The Role of Emotional Intelligence in the Workplace

Plato once said, “All learning has an emotional base”, yet many of us wish people’s emotions would just evaporate from the workplace. On the other hand, if that were to take place, we’d be missing out on valuable productivity drivers like passion, vision, mission, and even the drive to improve. Emotions in the workplace are our greatest friend, and can also be our greatest obstacle to workplace productivity. If everyone worked by themselves in the job they love, there would be no discussion or concern of emotions in the workplace. However, people work with other people, and those people have emotions, and we have emotions, and our boss has emotions, and our peers have emotions. And when any of these other people knowingly or unknowingly do or say something that doesn’t agree with (or worse BLOCKS) the ideas, dreams, or passions of another, then . . . well, you know what happens next. Yet despite this potential for conflict, don’t avoid the role Emotional Intelligence plays in your organization.

The practice of how emotions affect one’s work performance dates back to the first job position, whenever that was! The study of this interaction is relatively new in comparison to how “old” work is. The Industrial Revolution forced leaders of organizations to face the role of emotions in the workplace. Studies abounded trying to answer the question, “How do we get our employees to produce more?” Ideas ranging from changing the lighting to the timing and frequency of “breaks,” to modifying physical structure of the production line were all rooted in trying to achieve the goal of getting more productivity out of employees.

Until . . . someone had the brilliant insight that employees have emotions and those emotions are rooted in their dreams, passions, and their own ideas. Yes, employees were not just machines, they were human and these humans had emotions; and the amount and degree of emotions were directly related to how much they produced. Coming full circle, these emotions found their root in the human’s ideas of what they found to be enjoyable . . . and what they were passionate about. Two such pioneers into this psychological study were Peter Salovey and John D. Mayer when, in 1990, they published their influential article Emotional Intelligence. They identified four branches of emotional intelligence that they believe guides one’s thinking and actions.

The Four Branches of Emotional Intelligence 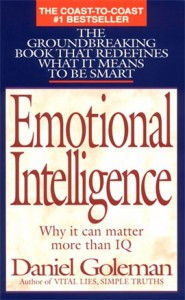 Emerging from these concepts surfaces the drive to help people find what they love to do and if that can be discovered, people will be emotionally engaged, energized, and productive. In 1995, Daniel Goleman expanded on the brilliance introduced by Salovey and Mayer and authored Emotional Intelligence: Why It Can Matter More Than IQ. In his book, he describes the “two minds”—the rational and the emotional—and how they together shape our destiny. Goleman delineates the five crucial skills of emotional intelligence and shows how they determine our success in relationships, work, and even our physical well-being. In the end, what he gave us is an entirely new way to talk about being smart. Time Magazine named it one of the 25 Most Influential Business Management Books and The Harvard Business Review has hailed emotional intelligence as “a ground-breaking, paradigm-shattering idea.”

Would you like to experience this more often? Then let us help you to maximize your team’s Emotional Intelligence. It’s a skill that can be learned . . . so let’s get started.